DarkTortilla is a complex and highly configurable .NET-based crypter that has possibly been active since at least August 2015. It typically delivers popular information stealers and remote access trojans (RATs) such as AgentTesla, AsyncRat, NanoCore, and RedLine. While it appears to primarily deliver commodity malware, researchers identified DarkTortilla samples delivering targeted payloads such as Cobalt Strike and Metasploit. It can also deliver "addon packages" such as additional malicious payloads, benign decoy documents, and executables. It features robust anti-analysis and anti-tamper controls that can make detection, analysis, and eradication challenging. From January 2021 through May 2022, an average of 93 unique DarkTortilla samples per week were uploaded to the VirusTotal analysis service. Code similarities suggest possible links between DarkTortilla and other malware: a crypter operated by the RATs Crew threat group, which was active between 2008 and 2012, and the Gameloader malware that emerged in 2021.

Based on the findings, the samples revealed numerous campaigns delivering DarkTortilla via malicious spam (malspam). The emails typically use a logistics lure and include the malicious payload in an archive attachment with file types such as .iso, .zip, .img, .dmg, and .tar. The archive file contains a single executable with the same filename but the .exe extension. This executable is a DarkTortilla initial loader sample. 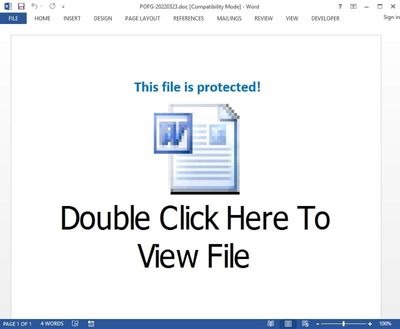 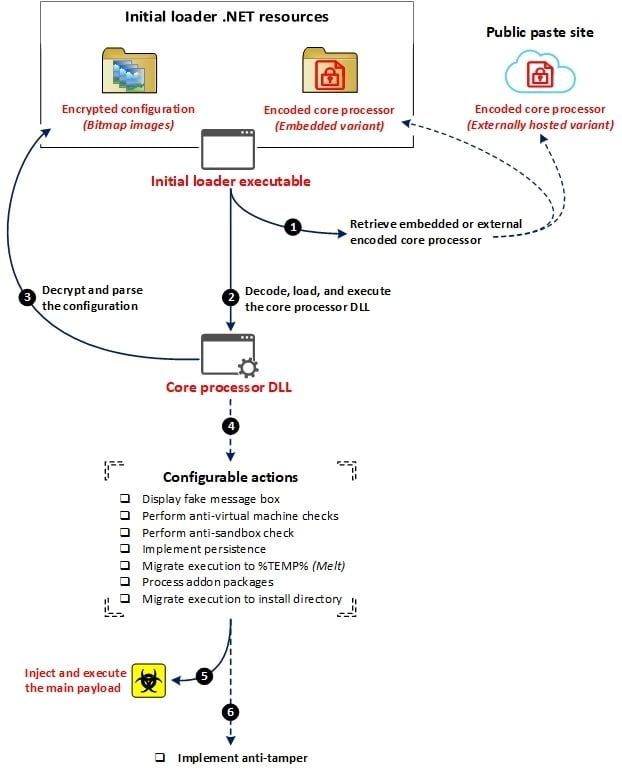 The initial loader’s execution flow typically starts by checking for internet connectivity by issuing HTTP GET requests. In samples that implement this check, the initial loader attempts to retrieve content from google.com, bing.com, or both. If the check fails, the initial loader retries the request(s) until all are successful.

DarkTortilla features standard and hidden techniques for implementing persistence via the Windows registry. Both options implement persistence in the HKEY_CURRENT_USER (HKCU) hive as a hard-coded value in the core processor code. This persistence results in the installed DarkTortilla initial loader executable being run every time the user logs in.

DarkTortilla is further noteworthy for its use of anti-tamper controls that ensure both the processes used to execute the components in memory are immediately rerun upon termination. Specifically, the persistence of the initial loader is achieved by means of a second executable referred to as a WatchDog that's designed to keep tabs on the designated process and rerun it should it be killed.

The core processor also retrieves information about the system's running processes and services. It then inspects this data for strings associated with Hyper-V, QEMU, Virtual PC, VirtualBox, and VMware. If any of the case-insensitive data matches the anti-VM detections, the core processor terminates the initial loader process.

DarkTortilla can be configured with zero or more payloads known as addon packages. These addons are in addition to the main payload that DarkTortilla is tasked with delivering. Observed addons include benign decoy documents, legitimate executables, keyloggers, clipboard stealers, cryptocurrency miners, and additional DarkTortilla payloads. Each addon package possesses a set of configuration elements composed of a static "F" character, an integer "{0}" that represents the index value indicating the position of the addon in the package array, and a character representing a particular property associated with the package.

If the payload is saved to disk, the location is specified by the addon path (F.{0}.P), subfolder (F.{0}.F), and filename (F.{0}.N) configuration elements. The F.{0}.P integer value represents a CSIDL value associated with a special folder on the system. For example, the value 2 corresponds to the Windows Start Menu/Programs folder.

The initial loaders that retrieve their core processor from public paste sites such as pastebin (.pl), textbin (.net), postimg (.cc) and paste (.ee). Some samples were found to download additional payloads from discord (cdn.discordapp.com)

Although DarkTortilla is a crypter, it is capable of evading detection, is highly configurable, and delivers a wide range of popular and effective malware. Its capabilities and prevalence make it a formidable threat. Understanding the malware, its usual delivery methods, and the TTPs used can be very beneficial for a SOC analyst, incident responder or threat hunter. NetWitness can aid in detecting the presence of DarkTortilla within your environment —so you can respond before this omnipotent malware causes major loss in the form of data, intellectual property, exfiltration, and/or financials.