In mid-January, reports started to surface about multiple cyber attacks against Ukrainian government websites. Hacktivism was spreading its wings in the form of DDoS attacks and Data Wipers. Relatively new, Data Wipers’ sole purposes are to destroy data beyond recovery. These tools can destroy large distributed systems and networks. This in turn can harm large and trivial organizations by attacking their availability, making them highly destructive malware.

This is not the first time Data Wipers were reported. They were first seen in 2012 in the form of the Shamoon Malware family and then resurfaced in 2016; starting January 2022, use of Wipers has exponentially increased during the Russia-Ukraine conflict.

According to MSTIC, this malware is designed to look like ransomware but lacks a ransom recovery mechanism. It’s intended to be destructive and is designed to render targeted devices inoperable rather than to obtain a ransom. In the same month, a new malware family called WhisperGate was reported by CISA, followed by multiple researchers. WhisperGate and its family of malware are prime examples of ongoing Hacktivism with non-financial destructive agendas.

Amid Russia’s invasion of Ukraine, multiple cyberattacks have allegedly surfaced, and various cybersecurity warnings continue to appear from various governments as well as cyber security organizations.

What is a Data Wiper?

As mentioned above, Data Wipers are remarkably like ransomware but without any recovery modules. Data wipers like ransomware iterate through the file system, with the intention of corrupting or encrypting files. Unlike ransomware, however, wipers destroy data using multiple techniques like deleting files, overwriting initial bytes, or corrupting the Master Boot Record (MBR) or Master File Table (MFT).

According to Microsoft Threat Intelligence Center (MSTIC)’s original advisory, WhisperGate malware is a multi-stage data wiper. It executes from Windows working directories, such as C:\PerfLogs, C:\ProgramData, C:\, and C:\temp etc., and is often named stage1.exe. Although initial delivery mechanisms are unclear, according to Cisco Talos, attackers had access to their victim’s network well in advance using a sophisticated advanced persistent threat operation (APT).

Stage 1 executes using Impacket and overwrites the master boot record (MBR). It also loads the fake ransom note as a string on the MBR by using WriteFile() which contains a Bitcoin wallet and Tox ID.

In Stage 2, upon execution, it connects to a discord server to download a malicious DLL payload as an image file using steganographic techniques to avoid AV detection. It uses a download link hardcoded in the Stage 2 binary executable.

The binary uses a sleep call with 10 seconds as a parameter as an added way of evading detection. 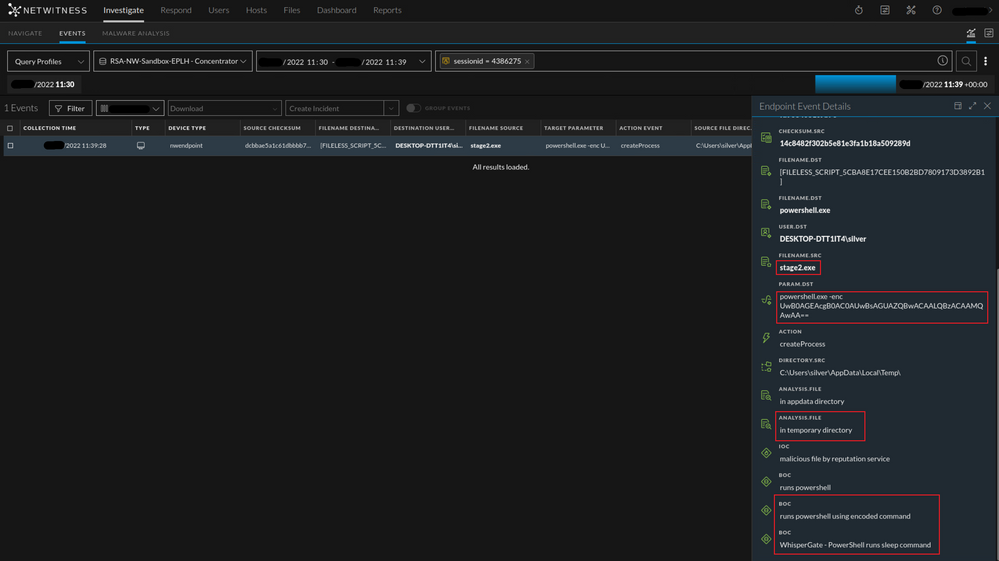 Stage 3 is then downloaded and executed in memory of the target system. This malicious DLL is coded in C# and obfuscated using packing software. Upon execution, 1st it tries to stop the Windows Defender service followed by deletion of the “C:\ProgramData\Microsoft\Windows Defender”. The code has a list of approximately 120 file extensions that will be encrypted if file extensions match. It destroys the filesystem by overwriting the contents of the file with a fixed number of bytes and renaming each file with a random four-byte extension.

A few variants use a Ping command in loop along with self-delete commands after successful termination from the file corruption module.

NetWitness Analysis:
After analyzing samples from various sources and advisories, the following are few already existing NetWitness detections that can be useful for WhisperGate detection –

As a result of this investigation, NetWitness Threat Research team has added following new endpoint detections specific to WhiperGate and associated families - 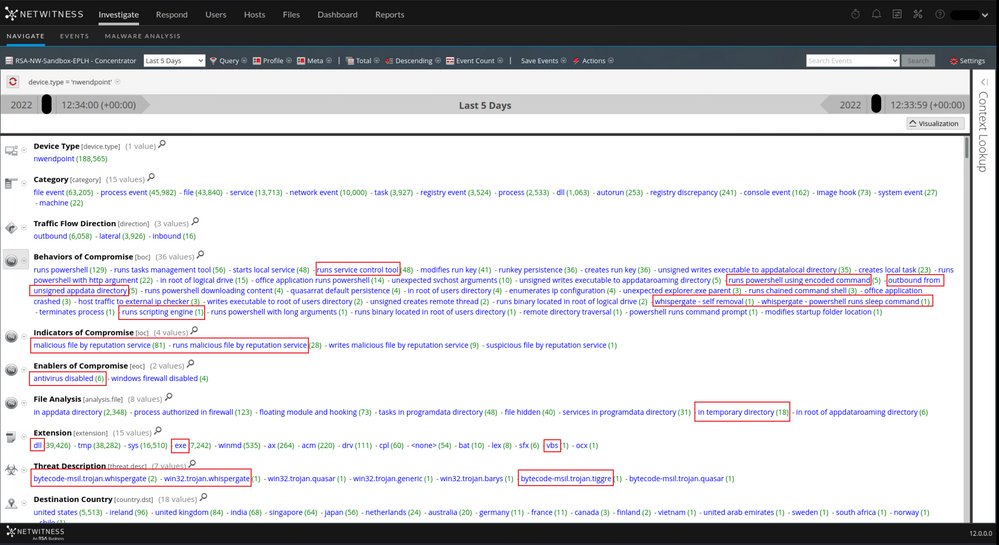 Our hope with this blog is to provide a quick overview of Data Wipers, particularly ‘WhisperGate’, and its recent spike in use as a destructive malware.  Hopefully, this information will aid and enable analysts in their efforts to identify and respond to similar attacks more quickly. The NetWitness Application Rules in this post should provide defenders with alerts that can be used as strong indicators of suspicious activity within their own environments.

In addition to this, as recommended by CISA, common well-known strategies can be followed to strengthen an organization’s resilience against these destructive malwares such as:

Thanks goes to fellow researcher @Sarthak for contributing to this effort.