As the network traffic is collected and passed through the system, the encrypted packets are stored as captured even if the system can decrypt them. As the Decoder parses the encrypted traffic, it uses TLS 1.3 keys that have been pushed or uploaded, and determines if the network traffic can be decrypted. If the Decoder is able to decrypt the traffic, it generates an additional meta keys, defined as tls.client.hdshk, tls.server.hdshk, tls.client.app, tls.server.app, tls.client.early which contains the decryption keys for that particular session. Whether the traffic is decrypted or not, the metadata service is tagged as 443 or SSL/TLS traffic, as the Decoder is port agnostic, even though it is marked with the default port number.

Network Decoder TLS 1.3 decryption is supported ONLY through special nonfips rpm builds which run in NON FIPS mode. The nonfips builds use crypto library which has pending FIPS certification in NIST, hence they are labeled as nonfips. If you are restricted to run only FIPS in your environment then TLS 1.3 decryption feature is not supported.

The following nonfips builds for components Decoder, Appliance , Concentrator and Broker are required to be installed, as they provide dependencies and support to TLS 1.3 decryption in session parsing and during content reconstruction.

The script automates the descriptor override generation steps highlighted in the wiki Hotfixes with Descriptor Overrides.

Step 2: Before upgrading other Node-X hosts with core services, run the script on Node-Zero.

After upgrading Node-Zero and all other Node-X hosts, and if you wish to install nonfips rpms at later then following are instructions:

Note: The /usr/local/sbin/nw-nonfips-override-generator.sh script would generate logs while running the commands, and also update /var/log/messages using the logger command.

According to RFC 8446 the TLS 1.3 protocol doesn’t support Private key based decryption and it only support a set of ephemeral symmetric keys also called as key secrets for the life of one specific TLS 1.3 session. The TLS 1.3 session also encrypts handshake, all the TLS records after Server Hello are encrypted , and at each stage a corresponding key is used for the encryption ex: client handshake, server handshake, client application and server application etc.. . So in order for decrypting a TLS 1.3 session all the required session keys tls.client.hdshk, tls.server.hdshk, tls.client.app, tls.server.app, tls.client.early(optional) are needed to be available.

The following is list of cipher suited supported in Network Decoder

First, make sure the Decoder is actually capturing the SSL/TLS traffic from the managed servers that you want to use to gain visibility into the encrypted sessions. You can do this by searching in the Investigate views (Navigate or Events) using the IP addresses of the servers as the destination IP addresses, and the service as SSL/TLS.

Conduct this search on the Concentrator that aggregates metadata from the Decoder that is expected to capture this network segment, or on a Broker that may have access to all collected metadata.

(Version 11.6 or later) In case of simultaneous ingestion of the encrypted and decrypted traffic streams in the Decoder, ensure that multi-thread assembly is enabled. This is to prevent mixing of packets from different sessions by single thread assembly. For more information, see the following topics:

The decryption process requires the native HTTPS parser to be enabled to examine the TLS handshake and to compare the uploaded encryption keys to determine if they decrypt the traffic. This can be validated in Admin > Services > Decoder > Config > Parsers Configuration panel as shown in the following figure. 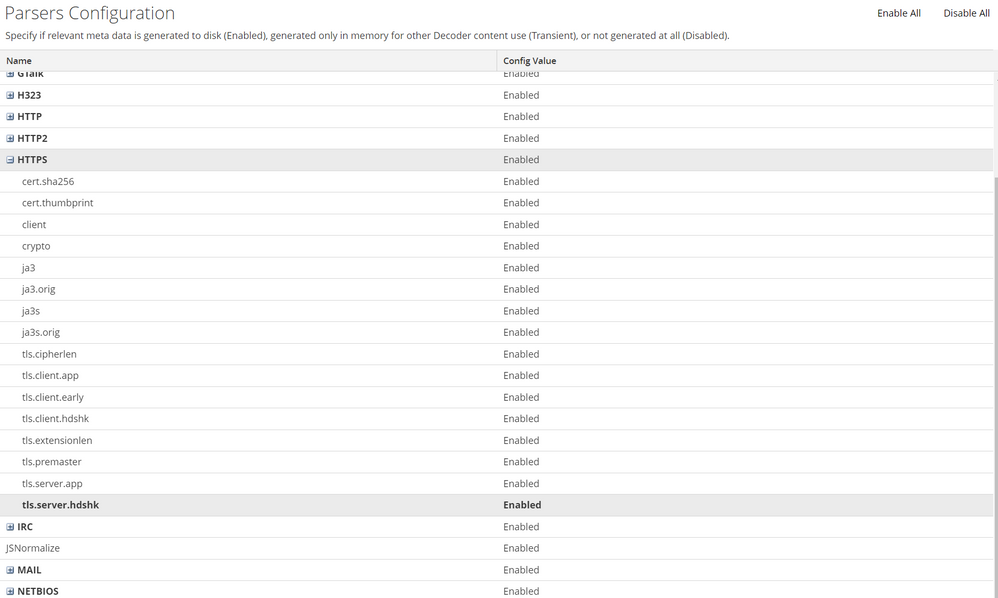 If TLS_Lua parser is enabled then meta version: TLS 1.3 is registered for TLS 1.3 encrypted traffic.

TLS 1.3 protocol only support ephemeral keys which are unique per session and Network Decoder need to receive those keys in time for parsing step.

Network Decoder provides sslKeys API which can receive the keys forwarded or injected to Decoder on RESTful interface.

A Thirdparty TLS 1.3 key forwarder which acts as Man-In-The-Middle (MITM) gateway for TLS 1.3 may intercept SSL handshake and forward the TLS 1.3 keys to Network Decoder.

If you are using BIG-IP LTM in your environment for application traffic management, load balancing etc.. and if you would like to decrypt and analyze TLS 1.3 traffic handled by BIG-IP LTM, then refer the following section to Configure F5 BIG-IP LTM and forward keys to Network Decoder.

If you are using other Man-In-The-Middle (MITM) gateway which can intercept TLS 1.3 handshake and forward the keys, then you can refer the following information and parameters to send keys to sslKeys API on Network Decoder.

The sslKeys API is used to push SSL crypto information to enable SSL decryption of a session's packets prior to parsing.

The sslKeys command has several parameters for managing premaster and private keys. This is the full list of parameters:

The Client random and TLS 1.3 keys can be passed as parameters to sslKeys, ex:

Note: For most of the sessions the CETS (CLIENT_EARLY_TRAFFIC_SECRET) key may not be generated or used by TLS clients and it is normal. However, if the other keys (handshake and application keys) are not generated and not available then TLS 1.3 decryption will NOT be successful.

Most commands return name/value pairs of statistics about the premaster and TLS 1.3 keys in memory. The statistics are listed in the following table.

Note: Uploading TLS 1.3 keys is not supported for real-time capture, but can be used to validate that decryption is functioning properly on the Decoder.

You can use the RESTful interface form to facilitate uploading of multiple keys, both premaster and private at the same time.

Similar to premaster key, capturing TLS 1.3 keys and uploading to Decoder in time for parsing is not an easy way. However, well known browsers like Chrome , Firefox and IE can write the TLS 1.3 keys they generate to a file and this is useful for testing purposes. To configure your browser to do this, create an environment variable called SSLKEYLOGFILE and set with a pathname to text file to write the keys. Decoder will accept the file exactly as it is written and will use all the decryption keys in the file for any encrypted traffic it captures.

The following is a sample NwConsole script that uploads the file to a Decoder:

Optionally the parameters can be passed in as list in the upload file, ex:

or you could use the following curl command (with the RESTful port):

Once the symmetric keys are uploaded, they will immediately be used for any necessary decryption. Symmetric keys are stored in memory and there is a limit to how many can be stored at any point in time. As more are added, the earliest keys will be aged out. You can also add available TLS 1.3 keys by just passing the random, CETS , CHTS , SHTS , CTS0 and STS0 parameters to sslKeys.

Note: For most of the sessions the CLIENT_EARLY_TRAFFIC_SECRET key may not be generated or used by TLS clients and it is normal. However, if handshake and application keys are not generated and not available then TLS 1.3 decryption wouldn't be successful.

It is advised to validate if Decoder is receiving keys to Decrypt TLS 1.3 sessions. As Decryption wouldn’t be successful if the keys are not available.

The following are few ways:

All storage of the packets is still encrypted, so when you search for any decrypted traffic, your query should still focus on service=443 or HTTPS (HTTP over SSL/TLS). If any packets were able to be decrypted, the tls.client.hdshk, tls.server.hdshk, tls.client.app, tls.server.app, and tls.client.early metadata is associated with the session that has the TLS 1.3 keys required for decrypting that session. The session will also have crypto metadata denoting the cipher suite.

The Decoder API that you can use to see the unencrypted packets is the /sdk/content RESTful service. You need to know the Session ID of the encrypted packets and the flags parameter masked to the value 128 (or 0x80 in hex). Point your browser to the Decoder RESTful interface and type in the following command, substituting the actual Session ID for <id>:

The Decoder returns a simple web page showing the packets after they are decrypted.

If you want to see what the packets look like encrypted, type in one of the following commands, substituting the Session ID for <id>:

For more information on the /sdk/content service, see the manual page for /sdk content.

If you are still not able to decrypt or view the decrypted payloads after attempting the steps above, try these steps.