The NetWitness Decoder supports capturing packets through the Data Plane Development Kit, also known as DPDK. DPDK is a set of libraries and drivers that support applications that work on directly on packets. DPDK's web site, www.dpdk.org, provides more information.

The Decoder can use the DPDK to ingest packets from Ethernet interfaces. It is an alternative to existing packet capture options built into the Decoder. DPDK offers these advantages:

DPDK completely detaches the Ethernet interface from the Linux kernel. It does this by doing the following:

For configurations using multiple adapter packet capture (available in 11.5 and later), you must use the manual procedure outlined in Manually Move a Capture Interface to DPDK . For example, the migration (dpdk migrate) does not support a Decoder when capture is configured with: capture.interface=PFRINGZC,em3; PFRINGZC,em4;packet_mmap,em2.

For configurations prior to 11.5, the procedure that uses the devices parameter to capture from multiple PF_RING-supported interfaces (for example, ixgbe and i40e) will be converted to using DPDK, along with the multiple adapter packet capture, so that one capture thread is used per interface.

For example, the migration will work if configured as follows:

Note: dpdk migrate only functions with PFRINGZC, not mmap interfaces.

If you are using PF_RING to capture packets on your Decoder, you can use the Decoder's dpdk migrate command to migrate your existing PF_RING capture devices to DPDK. This command uses your currently-selected capture device configuration to determine which network interfaces are moved to DPDK control. 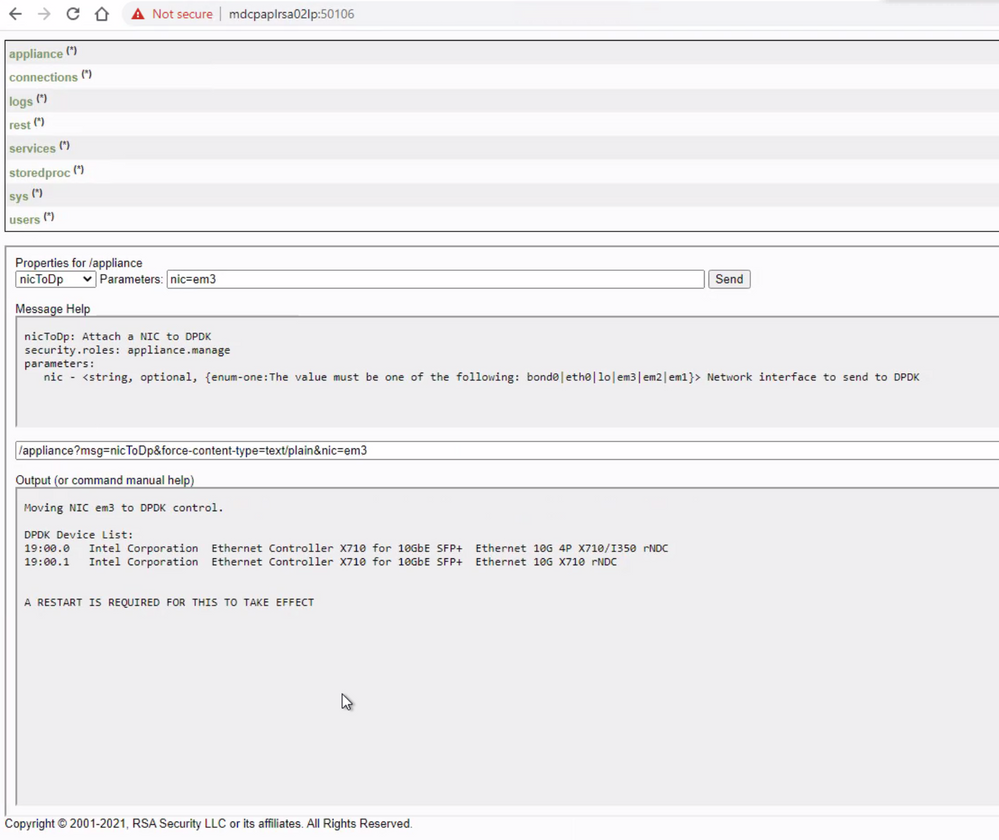 Sample ouput when the capture is in Stop state:

Receive Side Scaling (RSS) efficiently distributes the network receive processing across multiple CPUs in a multi-processor system. RSS ensures that the processing associated with a given connection stays on the assigned CPU.

IMPORTANT: Receive Side Scaling is supported on DPDK devices using the ixgbe or i40e device drivers only.

To enable RSS in a DPDK controlled NIC, set the /decoder/devices/DPDK/(PCI_ID)/config/rss value to a value greater than 1. The typical values of RSS must be a small power of 2, for example, 4 or 8. This value determines the number of CPU threads to be allotted for packet processing during the next capture. Similarly, if assembler threading is enabled, a matching number of assembler threads will be created to process the packets on each incoming queue.

For example, the following sample configuration will utilize a total of eight threads (four capture threads + four assembler threads) for multi-adapter packet capture with DPDK and multi-assembler threading turned on. This is the maximum recommended value for an eight core Decoder CPU.

assembler.threading.enabled set to on or true

To minimize packet drops, it is recommended that you keep the total number of capture and assembler threads less than the number of cores per CPU.

When RSS is enabled, Decoder utilizes the RSS hardware acceleration on the capture NIC to apply a symmetric RSS hash function. The hash function sends packets from both directions of a given stream to the same queue. It enables the packets received on that queue to be processed by a dedicated assembler thread. This eliminates the need for Decoder to merge streams from different RSS queues and reassemble the streams. Hence, it is recommended that you enable multi-threaded assembly when using RSS. To enable, set /decoder/config/assembler.threading.enabled to true or on.

The DPDK capture in the decoder service provides the ability for load balancers to failover and avoid data loss when decoder capture is off or when the service is shut down due to maintenance activity. When the decoder capture is stopped, the DPDK capture interface link status is down. This provides the ability for the traffic ingestion physical load balancers (for example, Keysight Ixia, Gigamon) which monitor interface links to switch to a different decoder and avoid data loss.

Refer to the (Optional) Data Plane Development Kit Packet Capture topic for instructions to configure DPDK capture on the decoder.

Some load balancers monitor interface link status through NIC link lights. You must disable WOL as the interface will not be down if WOL is enabled. To disable WOL in the BIOS, follow the BIOS instructions.

Note: When you restart the device and if capture does not auto-start, the lights on the capture interface are on. But if you turn on capture and turn it off again the lights will be off.

In case you need to revert DPDK on capture interfaces you can use the Appliance service dpToNic command.