Reporting is a collection of data as a result of monitoring the network traffic, which can be used for further analysis. In NetWitness you can run a report against NetWitness Database core services to identify the network activities. For example, if you want to identify the Top Source Countries and Destination Countries, or top Threat and Risk trends that help monitor any changes to the normal categories or monitor the users and services that may potentially have malicious activities etc.

The reporting typically consist of: Reports and Charts. You can report on the log, packet and endpoint data collected, and customize the reports and charts to enhance the visual appearance. You can create real-time reports for historical data. You can create charts and dashlets, that can be added in the real-time chart dashlets ​as well.

The data that you can report or alert depends on the configuration of Reporting Engine and the data sources that you specify as part of the rule definition.

Note: Make sure you have access to the components in the Reporting.

Note: Reporting is accessible based on the role based access, defined for the user.

A report is a combination of rules and other formatting objects such as headers and HTML-formatted notes that describe and identify data pertaining to a particular area of interest. Reports are defined and managed in the Build Report page and can be scheduled to run on an adhoc or timely basis. Once a report is run, results are stored centrally and can be automatically sent over email, SFTP, URL, and NFS to users, viewed via the NetWitness web interface, downloaded as PDF and CSV files.

A report consists of the following:

Note: In the Reporting user interface, the displayed date or time is always according to the user-selected time zone profile.

A rule is the basic and essential building block in the Reporting. You must create a rule which can be used in a Report, Chart or Alert.

A rule represents a unique query that detects and summarizes the requested information within a collection of network data.

The rule syntax is very similar to that of Standard Query Language (SQL) where you can use the select clause, where clause, sort and group options and limits for the result set. A rule consists of the following:

Note: In the User Interface (UI), the date or time displayed depends on the time zone selected by the user.

There are different rule types in the Reporting. Rule types designate the source of data for the report rule. Following are the rule types:

Note: In the User Interface (UI), the date or time displayed depends on the time zone selected by the user.

A list is a variable that refers to a series of comma-separated values (CSV). You can insert a list into a rule or use it as an argument to a rule action. Lists can act as placeholders for other values, which you can populate and update as needed.

You can create, manage and view lists that can be used to define rules for Reporting and Alerting. You can also filter and delete the unused lists.

Lists cannot be empty or have duplicate or blank values.

Note: If you are defining a report with a rule which has lookup_and_add in the Then clause and direct the report output to a list, the list is not populated with the result.
For example, if you create a rule with ip.src in the Select clause and lookup_and_add ('ip.dst','ip.src', 10) in the Then clause, the report displays the result, but if you have redirected the output to a list, the list will be empty

Chart is a tabular or grid representation of data. It consists of the following:

Any NetWitness DB rule in the Reporting Engine system which is not sorted by none can be used to instantly create a chart. In NetWitness, the chart interval can be adjusted from the chart definition panel itself. Each time a chart runs, it stores its result data locally in the Reporting Engine, so that it can be reviewed in either the Dashboard View or Chart View without any performance considerations. You can also filter the unused charts from Chart View.

Note: In the Reporting user interface, the output for the field where Date and Time are displayed is always according to the user-selected time zone profile.

This section lists recommended guidelines to enhance the execution time of your reporting entities such as rules, reports, alerts, charts, and lists. The guidelines are provided for the following:

If the reporting entities such as report, alert, or chart contain NWDB rules (in most cases where the query contains Group By) takes a long time to execute, you may do the following:

If NWDB rule execution fails due to timeout, you may get the following errors on the View a Report panel:

In such cases, you need do the following:

If a rule that consists of single or multiple lookup_and_add rule actions, takes a long time to execute the report, it is because each of the rule action triggers multiple lookup queries on the NWDB data source resulting in longer execution time.

To improve the report execution time, you may do the following:

In case of List value reports (for any data source type), individual reports will be generated for each value in the list. Therefore, more the number of values in the list the longer the reports will take to execute. Hence, you must use a refined list to generate such reports.

Reporting Module provides you the option to set up access control for all the components in the module. In NetWitness, you can define different roles and specify the access control for each of the role from the System Security module. You can define the access control to be provided for the Reporting module for each role. For more information, see "Step 1: Review the Pre-Configured NetWitness Platform Roles" and "Step 2: (Optional) Add a Role and Assign Permission" topics in the System Security and User Management Guide.

In the Reports module, you can modify the role permissions or access to the following Reporting objects:

The Following is an example of the hierarchy of the object groups, objects and dependents. This is an illustration of the Report Groups and Reports hierarchy. 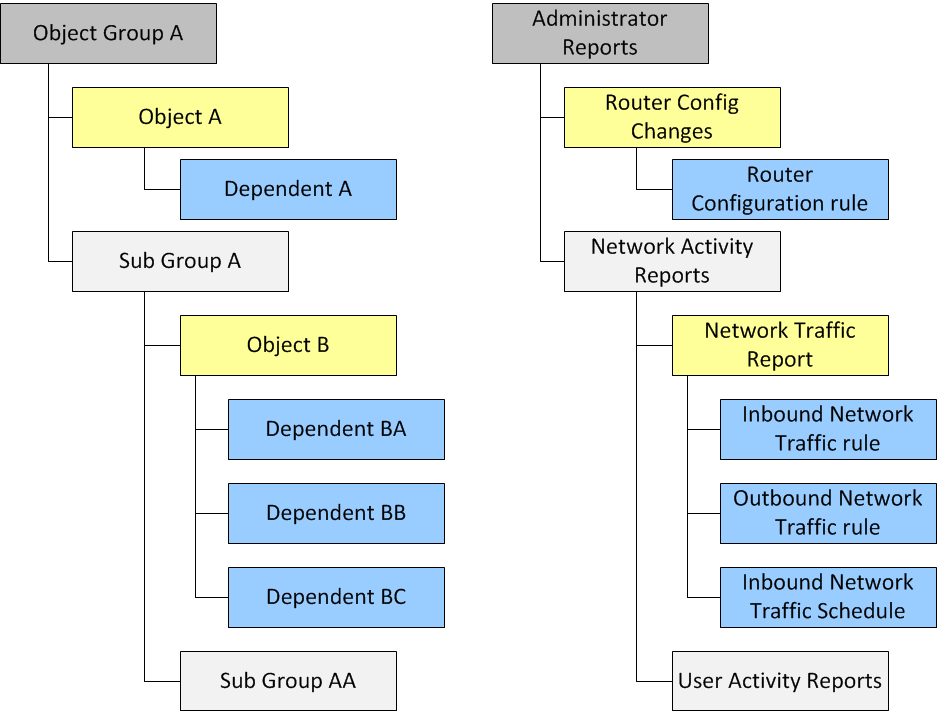 Permission for Objects or Dependents

When the Analyst applies a Read & Write permission for the Operator role and selects the option "Apply Read-only permission to Rules in the <Object>", the permissions is set for the different dependents as follows:

Roles and Permissions for Reporting Module

Depending on the user role, you can set the following access permissions to access the Reporting module components (Rules, Reports, Charts, Alerts, Lists):

Note: You must enable all these permissions for a user role to be able to define, delete, manage and view each of the Reporting modules. You must also have appropriate permissions for the data source to be listed, while defining the reports, charts, or alerts. For more information, see "Configure Data sources Permissions" topic in the Reporting Engine Configuration Guide.